Help me get into this AMAZING bachelor of education program!

Posted on September 22, 2011 by canadianproportions

Ok friends, family, general internets… I am turning to you for some help to make my application to the Outdoor and Experiential Learning program at Queen’s University outstanding! Want to know what it’s about? Take a look by clicking here.

An alternative résumé [sic] telling us the things about yourself that a formal résumé seldom includes. You can be as colorful as you wish, but keep the thickness to a regular weight and nothing trailing or raised on the surface of the page and you can also make up the categories. This résumé does not have to be typed, so think “outside the box” of typical résumé limitations. For instance, you could have a category about favorite books, inspiring moments, passions, personal hobbies or quirks. The alternative résumé has been introduced to help us distinguish between applicants at an early stage in the selection process …
-Queen’s University, 2011

My idea is to create one section in the resume where I will post the results of an online poll, “what is one word you would use to describe Heather Holmes?”

Please leave a word in the comments of this blog so that I can have a real poll to take results from! You may comment anonymously. Any word will do…

(fruit basket, candle snuffer! and all that’s random is LITs…)

Posted on January 16, 2011 by canadianproportions

I got my first try at ice climbing yesterday! Big curtains of ice, rather than the snow-filled gullies that I was able to climb in Scotland. I joined the Alpine Club of Canada, Ottawa section and joined them for a women’s only, beginners-welcome day of climbing. Everyone was super friendly, even in the cold parking lot at 8am when it was hovering somewhere near -17°C (that’s about 1°F). After a quick stop to pick up boots and coffee, we were on the road to Calabogie.

The climb is very easy to get to, just a couple minutes down the trail from the highway and we made it to the cliffs! The ice at Calabogie isn’t very tall, the climbs are 25-30 feet, but that is made up for by the nice wide curtains of ice that form, offering many different climbs on the same cliff.  One really fun and interesting exercise was to climb using only one tool, to work on your foot placement.

The ACC is very easy to join. Membership is around $45 and that allows you to participate in club events and borrow club gear (if available). Winter events include ice and indoor climbing, cross-country skiing, back-country skiing and snowshoeing. For more information you can click here to access the Ottawa ACC web site, be sure to check out the calendar of events! 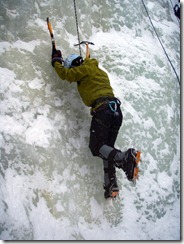 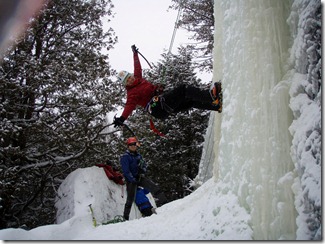 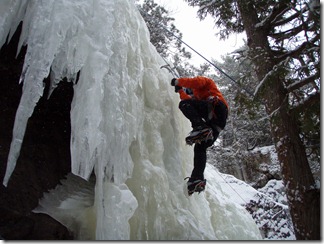 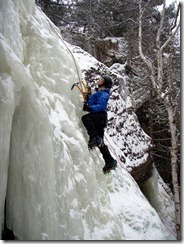 Posted on January 4, 2011 by canadianproportions

Keeping with my goal of experiencing all my home country has to offer, I made the trek down to Buffalo, New York Ontario last week during the holidays. The city is hosting the world under-20 Ice Hockey Championships, and my dad bought the family some tickets. The games began boxing day, which made Christmas morning a very patriotic event: red and white jerseys, mittens, leis, and even temporary tattoos emerged from under the tree. We packed our bags and downloaded mobile apps to give us instant reports on the three bridges that cross over to the USA. We braced ourselves for heavy traffic: with over 65% of tournament tickets sold to Canadians, it certainly didn’t look like it would be the Americans playing with home-ice advantage.

Our journey began with an unexpected visit to Niagara Falls. According to mom’s iPhone, Rainbow Bridge was going to be the shortest wait to cross into the USA. It proved true, and along with a relatively quick crossing we had the extra surprise of seeing the falls from the bridge.

As soon as we pulled into the Double Tree hotel, we realized just how wonderful this tournament must be for Buffalo’s struggling economy. Every room was full, and every guest was wearing the maple leaf. On our way to the arena, our shuttle driver told us he was happy to have us all in the city, and he was surprised that Canada’s “conservative” laws don’t allow us to tailgate before games. He dropped us off at the Pearl Street Grill & Brewery, the only place to get lunch near HSBC Arena. There was an hour-long wait to be seated in the dining room, and the deli was standing-room only. Again, every single customer was dressed in red and white.

We arrived just after Switzerland beat Germany by a goal. The first changeover between games was a wakeup call for the tournament organizers, who soon realized they would need a lot more staff than expected. The stadium needed to be emptied between games; even people with tickets to all three games needed to exit and enter the arena again.With large crowds and few staff on hand to check tickets, this turned out to be a bit of a long ordeal. The crowd never got angry, unless you count the boos and yells whenever an American came down the escalator. The mood was mostly excited, and at one point the entire crowd joined together for a spontaneous singing of Oh Canada!

After giving up the first goal to Russia, Canada finally got over their jitters and we took home a solid victory of 6-3. We took a walk around the arena to kill time and came back for the next game, Finland vs. USA. The stadium was a little emptier than the previous game, but still full of red-and-white clad fans. Fans who were a little confused when, after two full games, we watched a ceremony to declare the games “open.” Oh well, time to watch the “home team” play. The fans in our section decided to cheer for Finland – or rather Fin… LAND!

The next day we went on a little architectural tour of Buffalo. First we visited the Darwin. D. Martin House, then with a few random turns of the backroads we found another Frank Lloyd Wright house! At first we thought it was only inspired by him because it was just a normal-sized house, but a quick google check when we got home informed us that it was the Walter V. Davidson house.

We tried some day-after-boxing-day shopping in Niagara Falls, decided we didn’t like it, and went back to Aurora.

and so the Adventure begins

Posted on December 2, 2010 by canadianproportions

December 1st, 2010: applications are due for teachers college programs across Ontario.

I have not submitted any applications. All of a sudden my ideas of big adventures next year are real. Not only real, I have no other choice! I will not be taking a B.Ed program next year.

I didn’t apply because I simply don’t have enough/the right classes to get into the schools I want. Ontario teachers colleges require students who wish to teach in secondary school to have two teachable subjects. Some schools ask for more courses in the second teachable subject than others. Since the only school I qualify for is the University of Ottawa, I didn’t even bother applying.

That leaves me with one year and three missing geography classes. Oh, the possibilities!

Speaking of which, today I received a letter from admissions and registration at Yukon College in Whitehorse. My admission for the September 2011 intake of the General Studies program has been received, with all necessary documents, and will be processed in early 2011. Plan A: Move to Whitehorse is on its way to becoming a reality! 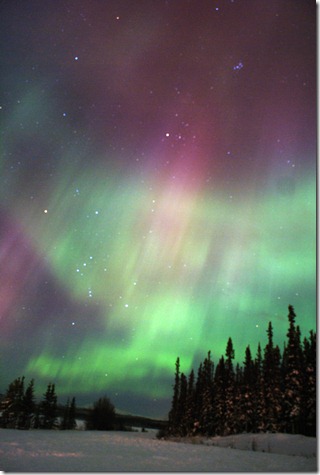 I could live here…

Not your average marketing label

Posted on November 10, 2010 by canadianproportions

What kind of traveler are you?

According to Tourism Canada, I am an “Authentic Experiencer.” This means I am spontaneous, ethical, independent and curious. I am most likely to be seen at nature reserves and campsites, and I value learning, cultural immersion, and personal development. According to my tourism professor, this means I am likely to immerse myself in local culture, explore using all the senses (whatever that means?) and travel for longer periods rather than short breaks; which means I am the industry’s favourite type of traveler! Longer travel = more money spent…

This label is called an “explorer quotient” and it is a way to group people together using not only demographics but also their personality and social values. I was introduced to this last week in GEG3320: The Geography of Tourism. I think the quiz works very well and could be a very useful tool for matching customers with services. I loved the wording in some of the questions, like asking how important it is to be able to brag about your experiences once you get home – smart! I found the results to be extremely accurate. Sure, I also share a lot of values with the “cultural explorer,” but the authentic is pinpointing the part of me that wants to be out in nature. It managed to peg something really specific without actually asking this anywhere in the questions: “authentic explorers will only join a group tour if it’s the only way they access a place they want explore.”

When I travel, I don’t want to be part of the group on a whirlwind visit; I want to find what is interesting to me and spend lots of time there. Which is how I managed to visit only 5 countries in 3 months of backpacking Europe after 6 months of living in Scotland (see here… well kind of, I gave up blogging after a while). I want to find that confused place, when you’re over the culture shock, that sense of wait, where is home again? Do I even have a home? Can Earth be my home?

Let me know – I’m curious to see if others find this quiz as accurate as I did.